A friend sent me this article from GothamSchools.org. This piece does a great job explaining the difference between old and new state achievement test math questions (old achievement test vs. common core aligned test). It also talks about how teaching will have to change going forward to prepare students for these tougher yearly assessments. Even if your children are young and won’t be taking these new achievement tests for many years, it is important to look ahead and know the level of expectations that are coming for your child. It won’t be easy. You can’t depend on your child’s teachers to do it all. You will need to pay close attention to be sure your child is mastering the common core standards for each school year. No one will do a better job of this than you. If you would like to read this article at GothamSchools, CLICK HERE.

When I first saw the Common Core math standards, I wasn’t sure precisely what made them more rigorous than the old ones. It wasn’t until New York State released sample Common Core-aligned questions, and I started working with teachers to adjust their classes accordingly, that I began to understand what sets the new standards apart and how we can prepare students to meet them.

Shifting our instruction to reflect the Common Core was tough those first two years, since we didn’t have many examples of what Common Core-aligned questions actually looked like. Our first break came in June 2012, when New York State released sample questions for grades 3-8. Our initial reaction to these questions was, “Wow. You’ve got to be kidding! These are really hard.” We noticed problems we were used to seeing in one grade moved down one or more grade levels, which meant students would have to master material sooner.

But as we dug deeper, we were able to name and describe some of the things that made the substance of the new questions, not just their placement, different from the old ones. This understanding helped us develop practice questions that would familiarize students with the problem-solving skills they needed for the new tests.

Notably, the new questions often include:

In this first pair, while the questions test the same content, the Common Core-aligned question requires students to complete multiple steps in order to solve for a missing part.

Instead of simply adding two numbers, as students can do to answer the first question, to answer the second question they need to add up the miles driven on Friday and Saturday and subtract that number from the total amount driven. The old 3-8 tests asked questions that could always be solved by doing one simple calculation. If two steps were needed, the questions would be split into two parts and it would tell you to solve step one, then step two. This did not prepare students for the demands of higher level math classes in high school or college; nor did it prepare them for the real world. If your boss had to give you step-by-step prompts to solve every problem, you would have a short career.

In the following pair of questions, both from sixth-grade tests, the Common Core-aligned question increases the rigor by using fractional edge lengths where the old question used whole numbers: 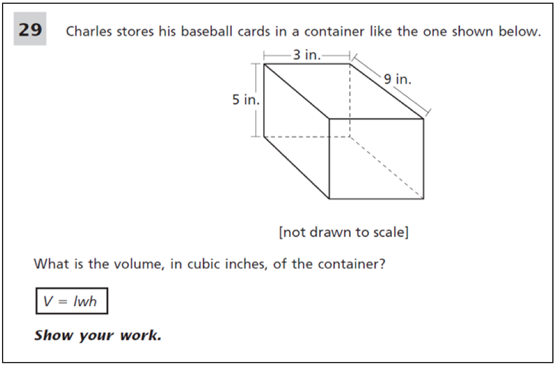 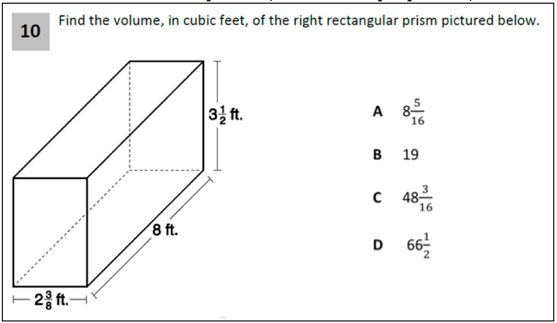 The new Common Core question also removed the formula from the question itself, instead locating it on a “reference sheet” provided at the beginning of the book. The effect of this edit is that students now have to “use appropriate tools strategically,” a practice required in the new standards.

The questions above illustrate how the standards are being tested in less predictable ways, which was scary for me as a math coach, and for the teachers I work with. We realized that teachers could no longer prepare students for the state tests by simply exposing them to all of the kinds of questions that had been used in the past. We would have to teach students skills and procedures so that they can do them, they understand them, and they can apply them to solve unfamiliar problems.

This meant making many changes to our teaching, including coming up with new problems that students hadn’t seen, and that reflected the kind of thinking the Common Core demands. Rather than starting from scratch, we tried to find ways to rewrite existing questions in a way that increased the rigor and gave students practice with the sorts of problems they would see on Common Core-aligned tests. One question we revised was a fourth grade question addressing the standard “multiply or divide to solve word problems involving multiplicative comparison.”

We used to ask the question this way:

‘Kim ran 16 miles last week. Sue ran 3 times as many miles as Kim. How many miles did Sue run?’

To increase the rigor, we modified this one-step question so that it read:

‘Kim ran ¾ of a mile yesterday. Sue ran 3 times as many miles as Kim. How much farther did Sue run than Kim?’

Our new version is a two-step question that blends in a second standard, “Apply and extend previous understandings of multiplication to multiply a fraction by a whole number.”

We couldn’t have come up with these problems without carefully studying the sample test questions released in June 2012 and about a dozen questions released for each grade level of the tests administered in May 2013. Once we figured out what it meant for standards to be more rigorous, and what a more rigorous question looked like, we found ways to tweak existing questions to increase their rigor. We hope that as we get better at writing and asking these sorts of questions, our students will get better at making sense of them and persevering in solving them.