By Testing for Kindergarten June 2, 2012

If you have an older child who will be taking the WISC-IV or the Stanford-Binet IV or even the Stanford-Binet V, Q-Bitz™ is an excellent game to work with beforehand. Both the WISC-IV and the Stanford-Binet IV have a block design subtest where the child must replicate a set of modeled or two-dimensional geometric patterns using cubes that have solid white sides, solid colored sides, and sides that are divided diagonally and painted two colors. This is a timed test, similar to the Block Design test given to younger students on the WPPSI-III. The child is shown a pattern and given 60 to 120 seconds to replicate that pattern using the 3-D blocks. 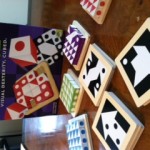 Here is how Q-Bitz works. Each player gets a tray of cubes. A player turns over a Q-Bitz card. Players race to recreate the pattern on the card. The first one to complete the pattern shouts, “Q-Bitz!” If everyone agrees that the player correctly recreated the pattern, then that player is awarded the card. In the early rounds of this game, players can look at the pattern card while replicating it. In later rounds, they are given 10 seconds to memorize the card and they must recreate it from memory. At the end of the game, whoever has been awarded the most cards for correctly recreating patterns is the winner. 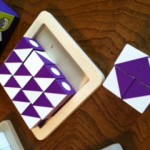 If you’ve read my blogs and my book, you know that I am against having children work with materials that are almost exactly the same real test materials. I do support working with different materials that help children build the underlying skills needed to do well on a test. That is why we sell blue and yellow pattern tiles at TestingMom.com. They are different from materials used in the actual test, but they do teach the visual spatial reasoning skills that are needed to do well on the WPPSI or the WISC. 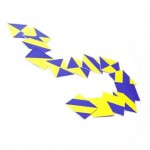 The materials in Q-Bitz are also quite different from those used in a real test. The cubes in the game are much smaller, they are different colors, and they include a side with a circle, which is different from the cubes used in the test. Frankly, copying patterns during a Q-Bitz game is much harder than copying patterns using the larger blocks on an actual test. That is why I would recommend that you play Q-Bitz with your OLDER child if he is going to take the WISC or Stanford-Binet IV. I do have a few caveats. Q-Bitz is for children age 8 and over. Do not use this with younger children who are going to take the WPPSI. The blocks are way too small for their little fingers and the patterns are too complicated.

My husband, kids and I played a few rounds of Q-Bitz just to test it out. The competitive aspect of the game made it lots of fun. The blocks are very small and the patterns are quite complicated, which made the game a struggle for me (my visual-spatial reasoning abilities are not the greatest). I didn’t win one round! But I had a lot of fun and my skills improved with each pattern I tried to copy. Based on our experience, I’d say this game will be difficult for 8-year-olds (even though it is for kids age 8 and up). You will want to start a younger child out with the simplest patterns to replicate. But it is a fun game and a game where a child’s skills will improve with practice, which is why I recommend it for older children who will be tested in the coming months.

If you want to learn more about Q-Bitz, it is on page 3 of my top 20 recommended products at at Testing For Kindergarten. Even though I have it at this kindergarten site, remember – it is for older children. If you have a younger child who will be taking a test involving block design, please work with the pattern tiles at TestingMom.com, or have your child replicate patterns that you make with parquetry blocks, which are on page 1 of my top 20 recommended products. Both will go a long way in helping a young child build the visual spatial reasoning skills needed for early childhood testing.

While I do believe Q-Bitz and our pattern tiles are great to help children preparing for the WPPSI-III or WPPSI-IV, the WISC-IV, the Stanford-Binet IV or V, the game and the tiles are also excellent in helping your child build his or her visual spatial reasoning skills in general. If you have a child who will be taking the Naglieri or NNAT®2 test, working with these materials will strengthen their ability to work with geometric figures and shapes – a skill that is needed to handle every subtest on the NNAT2. 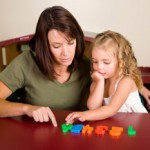 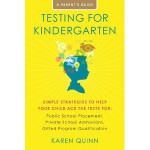 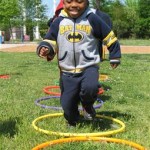 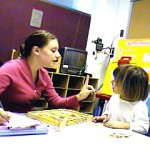 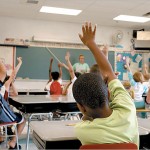