How to Find a Great Nanny

By Testing for Kindergarten January 24, 2015

This article appeared in today’s NY Times. CLICK HERE to read it at the Times website. I thought it was very helpful for those in the market for a nanny. It mentions Tammy Gold, who wrote a book called “Secrets of the Nanny Whisperer.” If you are in the market for a nanny, that might be just the read for you before you hire someone. She talks about thinking about the type of nanny you want to hire based on your personal needs. There are 3 kinds – a parental unit nanny, a partner nanny, and an executor nanny. Looking back, we needed a parental unit nanny when we hired Bev, who was with us until our kids started high school. I was working full time, as was my husband, and we needed another full-time parent substitute who could be there when we couldn’t. Beverly Knowles absolutely filled the bill for us. I know that we were lucky to find her. She came to us through an agency. She had already raised two sets of children from other families. She’d held both jobs for many years, so I knew she was committed. But it was the way Bev held Schuyler during our interview that sold me. She immediately had a bond with her and I knew she was the one.

We were so lucky with Bev (see her picture below). 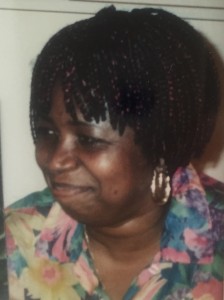 She was absolutely committed to the kids, their fierce protector on the playground, and my right arm when it came to being there when I needed her. To this day, my children (who are grown up now) think of her as a member of their family. They take her dinner, have Thanksgiving with her when we can’t, call her when they need a shoulder to cry on. My children and Bev all live in NYC now, while I’m out in California. So it warms my heart to know that they have a member of the family present for them. Sam ended up in the hospital a few years ago with food poisoning. Bev was by his side until I could fly out there. I don’t know how I would have raised my children without her. I think that the reason we were able to stay together all those years (while many of my friends would have arguments with and break up with their nannies) was because both of us let the little things go. Sure, there were times when I was frustrated or annoyed with something Bev would do. I know she felt the same about us. But we both let those small things slide and focused on the big picture and what was truly important. It was kind of like having another marriage partner. We managed to stay together for the long term. If I could justify having Bev in my life today, I would. But I guess it’s a little odd for a grown woman to keep her nanny when the children have long ago left the nest. Anyway, here is the article. I think you’ll find it interesting and helpful.

Finding a Nanny Who Fits With Your Family, by Paul Sullivan

IF you’re lucky enough to have a nanny like the one Shachar Scott has, one who was with her at the hospital when her twins were born more than three years ago, does everything she wants, keeps her informed when she travels and gets along brilliantly with the family, stop reading now.

For everyone else with a nanny, listen up: You’re probably doing it all wrong. Maybe you’re expecting too much or not being honest about yourself and your children. Maybe you’re missing the cues that your nanny is fed up with your micromanaging and is going to leave any day now. Or maybe you picked the wrong kind of nanny from the start.

Whatever the case may be, the row you’re hoeing can be tougher than people who are juggling day care or parental help might think (though don’t expect any sympathy). One of the reasons is most parents don’t understand what their nanny wants, does and expects in return.

Or so says Tammy Gold, in her new book, “Secrets of The Nanny Whisperer: A Practical Guide For Finding and Achieving the Gold Standard of Care for Your Child” (Perigee, 2015). Ms. Gold is a family therapist in Short Hills, N.J., whose practice has grown to include coaching, consulting and crisis management for nannies and the families who employ them.

Her book serves as both a how-to and a how-not-to guide to the unregulated and unaccredited world of nannies. The International Nanny Association estimates there are 1.2 million nannies in the United States, but Ms. Gold said the real number is double or triple that, given how many nannies are paid off the books. The average pay, she said, is $12 to $15 an hour.

Parents looking to hire a nanny may envision a Mary Poppins type, quirky but full of love and lessons. But just like the Banks family in the books and movies, many families have to settle for Katie Nana, the nanny who storms out before Mary Poppins blows in. In real life, Ms. Gold said, nannies typically stay from one to two years.

Relationships that last longer generally work because the nanny is able to adapt through a child’s developmental stages, and the parents’ needs and home remain relatively constant.

The people who call someone like Ms. Gold for help are typically first-time parents who are clueless, or families who have already cycled through several nannies and want to know what they’re doing wrong. (She said her typical client had gone through three nannies in a year, though she had one client who had eight nannies in 13 months.)

One of the big mistakes parents make is failing to carefully consider their needs before setting out to find a nanny — then picking the wrong kind of nanny. There are three types, Ms. Gold hypothesizes: a parental unit nanny, a partner nanny and an executor nanny.

The parental unit nanny essentially takes over for both parents when they’re at work. Executor nannies are best for stay-at-home parents who can tell them exactly what to do. The partner nanny is in between, for couples who sometimes work from home and want to be more involved and other times are at work and need someone to run the house.

Continue reading the main story
Problems arise, for example, when parents hire a parental unit nanny who needs to be in charge but are home themselves giving direction.

“People think you need a nanny with a college degree or a nanny who is supersmart or a nanny who is young,” Ms. Gold said. “My nanny is none of that. She had raised two sets” of children from two families over the years.

The nanny has now been with Ms. Gold’s family for 10 years and three children.

Part of the problem, Ms. Gold said, is that people do the search backward and find nannies through referrals before they know what kind of nanny they want. Better to first make the list of essential qualities, as well as traits to be avoided, she said.

Nadia Wallace, a former litigator who now owns a yoga and Pilates studio in Brooklyn, equated the process to buying an apartment in New York City: You might get the top three criteria on your list, but Nos. 4 and 5 are going to be difficult.

Punctuality was one of the top traits that she wanted, said Ms. Wallace, whose husband, too, was working full time. She also placed a priority on finding someone who was keenly aware of her two children’s safety. “I wasn’t looking for a gourmet cook. I thought kindness and judgment and maturity were much more important.”

Her nanny lasted more than five years and is leaving now to go to college full time.

Most nanny-parent relationships fail over communication. When the relationship turns bad, Ms. Gold said, it resembles a marriage headed inexorably for divorce, with both sides misunderstanding the other.

Many more parents are guilty of overestimating the perceived value of how beautiful their home is or other benefits — like the free meals, a fancy car to drive and the occasional vacation with children in tow. “I have to be blunt with families: The nannies don’t care,” she said. “It’s a job to them. They need to balance the bad with the good.”

And nannies, Ms. Gold said, often resist enumerating problems with the family until they pile up. “I call it the nanny rules of 10,” she said. “They don’t vocalize their needs at an anger level of 2 or 3. They wait until they get to 10 and they leave.”

As much as some employers might say the nanny is part of the family, Ms. Gold pointed out that class differences and often cultural differences separate nanny and parent.

For example, while Ms. Scott travels for her job as a senior marketing director for West, an advertising agency based in San Francisco, she said her nanny travels more than two hours each day to get to the Scott home in Jersey City, N.J. She then works from 8 a.m. to 6:30 p.m. and travels back. That’s two very different types of travel.

Like most things in parenting, people stumble. Many approach hiring a nanny like Andrea Barzvi did. She knew the nanny wasn’t perfect but she thought she could make it work.

Ms. Barzvi’s nanny has worked out, sort of. She wasn’t a perfect fit after six months, but Ms. Barzvi kept her on because she and her husband both work and she feared getting a worse nanny. Having had a second child recently, she has come to realize that the nanny, who is older and less mobile, just can’t keep up. She also locked the baby in the house one day.

“Most people would be quicker to let their nannies go,” she said. “Personally, I feel terrible putting someone out of a job. Are you ever going to find that perfect nanny?”

Her current nanny is still caring for her children, but knows she is searching for a new one.

Not all parents are model employers, either. Jessica Summer Thompson has been a full-time nanny since 2007 when she finished her degree at Columbia University. Her longest job was three years and she had another for over a year. But others lasted just a few months or weeks.

“It can be the best job in the world, but I often say the parents can be more challenging than the children,” she said. “It can be a balance of finding the right fit so the parents don’t feel I’m trying to replace them and be the head of the household. But I do have to be in charge.”

Ms. Thompson said families should look at their search for nannies the way companies pursue different types of employees, from the long-serving to the ones who can fill a niche but will leave when that job is done.

“Some want a person to be with them from changing diapers through middle school,” Ms. Thompson said. “If you’re looking for someone who is going to be the type of nanny I am, who is not there for quite as long but for the older years can bring tutoring to the table, that’s what you look for.”

She added, “It’s about figuring out the best need for you and your family and finding the best fit for you.” That, of course, is the challenge.

Filed under Mommy Blogs, Parenting, Uncategorized · Tagged with babysitter, hire a nanny, how to find a nanny