Author Aims to Help Kindergarteners Get Off To a Great Start In School, By ANA VECIANA-SUAREZ

This article is from the Miami Herald. To read it on their site, CLICK HERE. 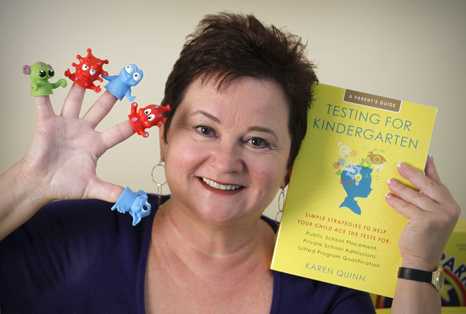 If Karen Quinn had known then what she knows now, she’s certain her children’s early educational experience would have been been better. That’s why the Sunny Isles Beach resident wrote a book about the essential skills a child needs when entering school.

Testing for Kindergarten, released this summer by Simon & Schuster, is much more than its lengthy subtitle implies: Simple Strategies to Help Your Child Ace the Tests for Public School Placement, Private School Admissions, Gifted Program Qualifications. It is, in fact, a practical primer for parents who want to turn on their kids to learning and guarantee them a good start in school.

Quinn, a lawyer by training, a marketer by experience and a researcher of all things educational, isn’t a get-the-flashcards-out preacher. Nor does she suggest you become one of those helicopter parents who drills her children while driving them to a $200-an-hour tutor.

“I want people to have the information to do the right thing for their children, but not to go nuts about it,” says Quinn, 54. “I’m hoping this book calms them down.”

In the current high-stakes educational environment, it is likely that every child is tested by the time he reaches kindergarten. In local public schools, kindergartners take the Florida Kindergarten Readiness Screener (FLKRS) within 30 days of starting school.

Quinn deciphers what such assessments measure and provides information and activities parents can use to reinforce the skills necessary to score well. Her message, first and foremost, is this: It is possible for every family, even those who cannot afford expensive tutors or enrichment activities, to provide their children with a good academic start.

She shares her own experiences in the hope that adults recognize their insecurities. When her daughter, Schuyler, was tested for admission into a top New York private school, Quinn found out “my little genius” was average. “I was crushed,” she admits, shaking her head.

Though Schuyler struggled through elementary school, Quinn also discovered that her daughter, now a student at a New York college conservatory, was a talented actress. She admonishes parents to be realistic — and to celebrate a child’s individual talents.

“There are a lot of traits that affect a person’s success,” she says, adding that not all of them can be quantified in a test. “I know that if I was tested, I would be very average. But I’m a very hard worker and that has made me successful. It’s not just native intelligence.”

The foundation of the book is that certain abilities help students succeed. She explains the seven key skills (language, memory, mathematics, knowledge, visual-spatial, cognitive and fine motor skills), how every test measures them and why they’re so important to master for school success.

Other chapters detail the most common IQ tests and the ways they do and don’t define a child. But surely a parent’s favorite section will be the list of milestones every child must achieve by ages 3, 4 and 5 to succeed at school, as well as the everyday activities that can strengthen those skills.

While preschool admission in South Florida isn’t nearly as competitive Quinn’s experience when her family lived in New York City, she points out that every 5-year-old in America will be assessed regardless of where they live or what school they attend.

Florida’s testing of kindergartners measures everything from letter recognition to listening comprehension, vocabulary and interaction with other children and adults.

A teacher uses the results to group her students so she can provide what educators call “differentiated instruction.”

Most kids on the lower end do catch up to basic standards by January, says Marisel Elias-Miranda, administrative director of the early childhood program for Miami-Dade public schools.

Like Quinn, she recommends that parents be active participants in their young children’s at-home education.

“Every moment spent with a child can be a teaching moment, and it doesn’t have to be from a workbook,” adds Elias-Miranda. “All it takes is 5 to 10 minutes a day.”

Private schools also use tests. At Gulliver Schools, preschoolers are given an assessment called the Brigance as part of an admissions screening process. It is similar to FLKRS, measuring many of the same skills.

Mary Kay Bell, principal of Gulliver’s primary school, says she often tells parents to limit TV and computer time, allow for plenty of unstructured play and cut down on the toys a child owns. Reading is essential.

“In addition to reading aloud, parents must realize that they act as role models for their children,” she says. “If they love reading, if their children see them reading, they will do the same.”

Quinn became interested in early childhood assessments when she noticed that her son, Sam, was not as talkative as his older sister. Though his pediatrician assured her that children develop at different rates, she followed her mother’s intuition and took him to a specialist. Sam’s delays, she discovered, were a result of fluid buildup from ear infections, a correctable issue.

But then the doctor delivered news that floored her: Sam had scored in the 34th percentile of an IQ test. When she asked what she could do to improve his scores — he was due to be tested for kindergarten the following year — the doctor told her intelligence was a fixed trait.

Quinn turned to her mother, a professor of early childhood education. Together they worked on a program to strengthen Sam’s abilities. A year later he scored in the 94th percentile.

Her experiences with over-the-top parents inspired her to write The Ivy Chronicles, a novel sold in a bidding war that netted her a big enough advance to leave the business. The movie rights to that fictional work and a second one have been optioned to Hollywood, but Quinn felt she had “one more book in me.” Hence, Testing for Kindergarten.

Since finishing the book, Quinn has developed an “IQ Fun Pack,” a Trivial Pursuit-type board game based on the seven abilities kindergartners should master. She has sold several for $300, but hopes to reduce the price by manufacturing it in China.

“Of course, not every child is going to be an A student,” she says. “But if a parent can get their arms around these seven skills, it’s going to make for a much more pleasant experience. In the end, that’s what every parent wants.”